Posted on November 8, 2014 by Robert Singleton 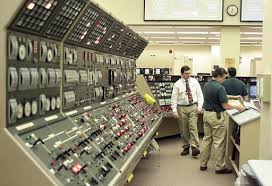 An engineering team’s preliminary investigation released early this afternoon determined that a voltage problem in one of the electrical panels supplying power to the pumps that keep the reactor supplied with fresh, purified water and the fuel rods submerged led to the automatic shutdown.

A problem with the same circuits caused the Perry reactor to shut down on October 20. As the Plain Dealer reported:

During a routine maintenance procedure early in the morning on that day engineers switched the electrical circuits to the pumps — and the second circuit failed to switch on, instantly leading the reactor to shut itself down.

Engineers traced the power failure in that incident to an electrical circuit card in a power inverter, a kind of transformer that switches the direct current produced by the plant’s generator to alternating current that powers the pumps. The company restarted the reactor on Oct. 27.

Oh, well. At least they got the reactor up and running for ten days before it crapped out again. Keep this in mind the next time you hear anyone talking about the reliability of nuclear power.

By day, I work for a call center. In my spare time, I try to save my hometown (and planet) from a nearly constant onslaught of greedheads, lunatics and land developers. I live in a fictional town called Austin, Texas, where I go to way too many meetings.
View all posts by Robert Singleton →
This entry was posted in Event Reports, Nuclear Regulatory Commission, Perry, Reactor problems and tagged Event Reports, nuclear power, Nuclear Regulatory Commission, Ohio, Perry, Uinited States. Bookmark the permalink.