Event Reports: Loss of offsite power, seismic vulnerability, a dropped control element assembly and another and another Fitness for Duty violation

Posted on November 7, 2014 by Robert Singleton 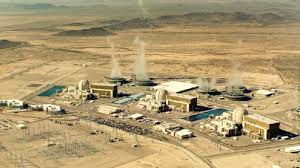 This week in nuclear power kicked on Hallloween:

1. Friday afternoon, the Diablo Canyon nuclear power facility in California experienced an unplanned activation of all six of the plant’s emergency diesel generators when a thunderstorm knocked out offsite power to the station. Unit 2 was offline at the time of the incident. Power has now been restored.

2. Early the following morning, operators at Michigan’s Cook nuclear power plant scrammed both reactors due to lowering condenser vacuum. Turns out the culprit was a condition described as degraded forebay. Cook says that thick grass and sand prevented adequate ventilation, leading to the drop in condenser vacuum.

The Event Report says that all systems functioned properly during the incident with one exception. The auxiliary feed pump for the Unit 1 tripped during the shutdown.

Today’s Power Reactor Status Report indicates that the Unit 1 reactor is back up to 48 per cent power this morning, while Unit 2 is still shut down.

3. On Wednesday evening, six hydraulic control units (HCUs) on the Unit 2 reactor at Quad Cities in Illinois were declared inoperable. According to the Event Report, the riser brackets on the HDUs were installed improperly. The problem with the riser brackets “could challenge the ability of the CRD hydraulic control unit to perform its design function during a seismic event.” Quad Cities continued to operate the reactor at 100 per cent while repairs were underway.

4. Also on Wednesday, a Control Element Assembly (CEA) unexpectedly dropped into the reactor core at the Palo Verde nuclear power plant in Arizona. Operators reduced power in the Unit 2 reactor, but when the anomaly could not be fixed within two hours, the reactor entered a Limiting Condition of Operation per station operating procedures.  Shutdown was achieved later that day, and the reactor remained shut down as of Friday morning.

5. And a report filed Friday said that a licensed operator at the Prairie Island nuclear power plant had been found to be in violation of the facility’s Fitness for Duty policy. The operator’s access to the plant has been suspended and that the individual has been removed from duty.