Posted on November 1, 2014 by Robert Singleton 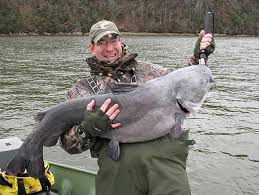 Tennessee anglers may have to find another place to get their PCB- and chlordane-laced catfish if the Tennessee Valley Authority (TVA) can’t figure out where the dam on Lake Boone is leaking. In three identical reports posted yesterday on the Nuclear Regulatory Commission’s (NRC) Event Notification page, the TVA announced its decision “to accelerate the Boone Reservoir annual drawdown after discovery of a sink hole near the base of the embankment and a small amount of water and sediment found seeping from the river below the dam.”

The reservoir is upstream of the TVA’s Browns Ferry, Sequoyah and Watts Bar nuclear power plants. The three plants have a total of six reactors, with Watt Bar scheduled to have another unit operational soon. The three reactors at Browns Ferry are Fukushima-style General Electric boiling water reactors that came online in the 1970s.

Despite concerns about the dam’s stability, all of the reactors at the three facilities continue to be listed at 100 per cent output, although you might not be able to entirely believe the posted ratings, as Unit 2 at Watts Bar is listed as being at 100 per cent, even though the construction project is still ongoing, and fuel has yet to be loaded into the reactor.

By day, I work for a call center. In my spare time, I try to save my hometown (and planet) from a nearly constant onslaught of greedheads, lunatics and land developers. I live in a fictional town called Austin, Texas, where I go to way too many meetings.
View all posts by Robert Singleton →
This entry was posted in Browns Ferry, Event Reports, Sequoyah, Tennessee Valley Authority, Uncategorized, Watts Barr and tagged Boone Lake, Browns Ferry, Event Reports, leaking dam, nuclear power, Nuclear Regulatory Commission, Sequoyah, Tennessee Valley Authority, United States, Watts Bar. Bookmark the permalink.