Posted on September 13, 2014 by Robert Singleton 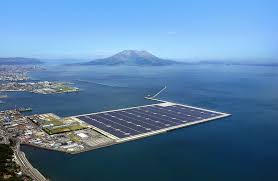 Jon Major, a research fellow at the University of Liverpool wrote in the Ecologist today:

Two companies in Japan recently announced they are to begin building two large solar power islands that will float on reservoirs.

This follows smartphone maker Kyocera’s Kagoshima Nanatsujima Mega Solar power plant, the country’s largest at 70 megawatts, which opened in late 2013 and is found floating in the sea just off the coast of southern Japan.

The two new solar islands, to be built by Kyocera and commercial partners, will form a network of thirty 2MW stations – adding another 60MW of solar capacity.

One other advantage to floating solar panels, particularly in areas where drought is a major concern, is that they lessen evaporation from surface water:

In India (floating solar panels) have also been used as an interesting dual purpose solution. In the state of Gujarat, solar panels were installed atop the Narmada canal, serving to both generate power and prevent water evaporating from beneath. 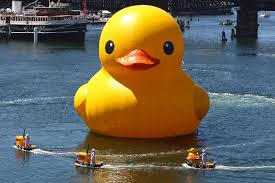 And an additional idea that should appeal to places like Austin, where drought is an ongoing problem and weird is a way of life:

There is also no reason why the design needs to be so functional. By far the most unique application is the concept of ‘energy ducks’, giant floating solar panel-coated water fowl which have been proposed to sit in Copenhagen harbour acting as both a tourist attraction and carbon-neutral power source.

By day, I work for a call center. In my spare time, I try to save my hometown (and planet) from a nearly constant onslaught of greedheads, lunatics and land developers. I live in a fictional town called Austin, Texas, where I go to way too many meetings.
View all posts by Robert Singleton →
This entry was posted in Japan, Solar power and tagged Japan, nuclear power, solar islands, solar power. Bookmark the permalink.