Posted on September 8, 2014 by Robert Singleton 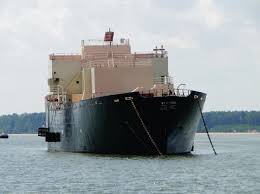 A World War II-era Liberty ship converted to a barge-mounted nuclear reactor will be towed from Virginia to Galveston to be scrapped.

The refitted Liberty Ship was used for power generation in the sixties:

According to the Corps of Engineers, the Sturgis was outfitted with a nuclear reactor to generate electric power for military and civilian operations in the Panama Canal Zone in the 1960s. The reactor was shut down in 1976, the fuel was removed and it was mothballed in 1978.

The radioactive material from the Sturgis wil likely be sent to the Waste Control Specialists low-level radioactive waste dump in Andrews County in West Texas:

Galveston was chosen for the scrapping because of its proximity to facilities that accept the sort of low-level radioactive waste and other toxic, discarded material to be removed from the ship, said Hans Honerlah, a Corps of Engineers program manager and health physicist.

The good news is there will be a public hearing on the plan in Galveston. The bad news is that it will happen tomorrow:

The U.S. Army Corps of Engineers plans to have a public hearing Tuesday in Galveston to detail the plan for the scrapping of the USS Sturgis.

By day, I work for a call center. In my spare time, I try to save my hometown (and planet) from a nearly constant onslaught of greedheads, lunatics and land developers. I live in a fictional town called Austin, Texas, where I go to way too many meetings.
View all posts by Robert Singleton →
This entry was posted in Andrews County, Low-level radioactive waste, Waste Control Specialists and tagged low-level radioactive waste, Waste Control Specialists. Bookmark the permalink.