Posted on September 1, 2014 by Robert Singleton 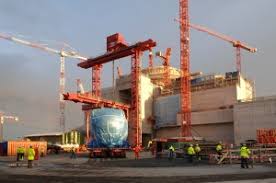 When a nuclear power plant is behind schedule or over budget, nuclear proponents like to blame pesky safety regulations or those darned environmentalists. As I told you last Thursday in a post on the expansion project at the Koeberg nuclear power plant in South Africa, sometimes delays are caused by greed and in-fighting in the nuclear industry.

It now seems as if the same situation is pushing back completion of the third reactor at the Okiluoto power plant in Finland. As Reuters reported this morning:

Areva-Siemens, the consortium building Finland’s biggest nuclear reactor, said on Monday the start date of the much delayed project will be pushed back to late 2018 – almost a decade later than originally planned.

Areva-Siemens blamed disagreements with its client Teollisuuden Voima (TVO) over the plant’s automation system, the latest blow for a project that has been hit by repeated delays, soaring costs and disputes.

The significance of the routine delays and cost overruns in building new nuclear power plants is that they call into question the ability of nuclear power to ramp up quickly enough to be a feasible method of fighting climate change and in determining what the cheapest means are of producing electricity.

In the case of Okiluoto 3, the delays have been significant:

Olkiluoto 3, which will be Finland’s fifth and biggest nuclear reactor as it aims to increase energy self-sufficiency, was originally due to start operating as early as 2009, but has been hit by repeated delays and soaring costs.

Areva said construction, which started in 2005, would not be completed before mid-2016, and that operations at the 1,600 mega-watt plant were not expected to start until late 2018.

Delays to Okiluoto 3 have sparked a fierce internecine battle among the companies tasked with building it:

TVO and Areva have traded accusations about who is to blame for delays and extra costs, and the International Chamber of Commerce’s (ICC) arbitration court is processing a dispute on cost overruns between the consortium and TVO.

There’s a further split and more finger pointing within the Siemans/Areva consortium:

Siemens, which has a 27 percent share of the consortium, meanwhile put the blame on Areva, saying its part of the contract – the non-nuclear, or Conventional Island, part of the power plant – was virtually complete.

The result of the delays — increased costs:

The plant’s construction costs were initially estimated at around 3.2 billion euros ($4.2 billion.) TVO has not updated the sum, but many say it could double at least.

Another Finnish nuclear project is being delayed by a factor that has nothing to do with regulations or opposition:

Finnish-Russian consortium Fennovoima is also having difficulties proceeding with its project to build a new plant in western Finland because the Ukraine crisis is driving away investors.

By day, I work for a call center. In my spare time, I try to save my hometown (and planet) from a nearly constant onslaught of greedheads, lunatics and land developers. I live in a fictional town called Austin, Texas, where I go to way too many meetings.
View all posts by Robert Singleton →
This entry was posted in Areva, Construction delays, Cost overruns, Finland, Nuclear Renaissance, Olkiluoto, Siemens and tagged AREVA, construction delay, Cost overruns, Finland, nuclear power, Siemens. Bookmark the permalink.