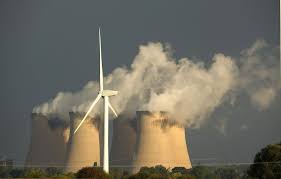 Background: Exelon operates a total of seventeen nuclear reactors in the United States. The company is also the nation’s 11th largest producer of wind energy. But it looks as if Exelon prefers its nuclear toys.

Exelon, the largest operator of nuclear power plants in the United States, has been vocal in opposition to the Production Tax Credit (PTC,) a subsidy to wind farm developers that drives down the cost of construction, and thus the cost of the power.

The tax credit expired at the end of 2013, causing a flurry of wind development to beat the deadline. Wind industry supporters say there’s still a chance it will be belatedly renewed, and are lobbying to make it so.

Exelon’s opposition to the PTC resulted in the company being booted from a major wind energy association:

It was a member of the American Wind Energy Association, but its opposition to the tax credit made Exelon the first member to be expelled from AWEA, according to the trade publication WindPower Monthly.

A statement from an Exelon spokesman revealed just how committed Exelon is to wind power:

Adams explained Exelon’s opposition to the PTC in this way:

With respect to the wind tax credit, “it’s time to declare victory on moving wind energy from a nascent industry to a mature business and let the PTC remain expired,” Adams said.

And yet, as I told you in March, Exelon is putting pressure on the state of Illinois to create a state clean energy standard that would benefit its existing nuclear plants. Further, Exelon has threatened to close three nuclear power plants in Illinois unless they get tax relief.

According to Crain’s Chicago Business:

Exelon lobbyists have floated the idea of creating a state “clean energy” standard or credit that would recognize the nukes for their clean-air benefits and their dependability as a 24/7 power source, according to people who have been briefed. That designation would entitle the plants to extra payments in some form — presumably from ratepayers.

The reason for Exelon’s support of nuclear subsidies, as I also told you in March, is simple: Nuclear power plants no longer make economic sense. But don’t take it from me. Take it from a self-describe pro-nuclear guy, the former CEO of Exelon.

Nuclear power is no longer an economically viable source of new energy in the United States, the freshly-retired CEO of Exelon, America’s largest producer of nuclear power, said in Chicago Thursday.

And it won’t become economically viable, he said, for the forseeable future.

“Let me state unequivocably that I’ve never met a nuclear plant I didn’t like,” said John Rowe, who retired 17 days ago as chairman and CEO of Exelon Corporation, which operates 22 nuclear power plants, more than any other utility in the United States.

“Having said that, let me also state unequivocably that new ones don’t make any sense right now.”

By day, I work for a call center. In my spare time, I try to save my hometown (and planet) from a nearly constant onslaught of greedheads, lunatics and land developers. I live in a fictional town called Austin, Texas, where I go to way too many meetings.
View all posts by Robert Singleton →
This entry was posted in Exelon, Finance, Nuclear Renaissance, Wind and tagged Exelon, nuclear power, Nuclear renaissance, United States, wind energy. Bookmark the permalink.