1. The Wolf Creek nuclear power plant in Kansas suffered a major loss of communications capability yesterday when the plant’s internal phone system, Emergency Notification System (ENS) and Emergency Response Data System (ERDS) became inoperable due to a power supply failure. As of this morning, the ERDS has been restored to service, but Wolf Creek has no estimate as to when the ENS and internal phone system will be back in place.

2. Yesterday morning, Illinois’ Clinton nuclear power plant conducted a test of its offsite siren system, and the results were not good. 26 of 40 Emergency Preparedness sirens were declared nonfunctional. That means that, had there been an emergency, 84.4 per cent of the population in the Emergency Preparedness Zone would not have been in range of an operable siren. The cause of the problem was a faulty microwave link at the plant.

Until repairs can be completed, DeWitt County has implemented the backup means of notification known as Route Alerting. This consists of roving vehicles with public address systems. I imagine those look something like this: 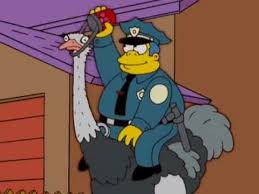 By day, I work for a call center. In my spare time, I try to save my hometown (and planet) from a nearly constant onslaught of greedheads, lunatics and land developers. I live in a fictional town called Austin, Texas, where I go to way too many meetings.
View all posts by Robert Singleton →
This entry was posted in Clinton, Emergency notification systems, Event Reports, Nuclear Regulatory Commission, Sirens, Wolf Creek and tagged Clinton, emergency notification systems, Event Reports, Illinois, Kansas, nuclear power, Nuclear Regulatory Commission, sirens, United States, Wolf Creek. Bookmark the permalink.