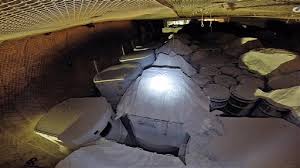 Nuclear Waste Partnership, the operator of the Waste Isolation Pilot Plant, is working on a draft recovery plan following the February 14 radiation release and a previous fire. The Albuequerque Journal reported this morning:

A recovery is underway at a troubled New Mexico nuclear waste repository even as an investigation into the cause of a radiation leak there continues, according to an Energy Department contractor.

Nuclear Waste Partnership has presented a draft recovery plan for the Waste Isolation Pilot Plant to the Department of Energy for review. The plan, scheduled for release in the coming weeks, is expected to offer details on how the contractor plans to deal with radiation contamination in the deep underground mine outside Carlsbad.

According to the Journal:

…NWP teams have begun making daily entries into WIPP for something called “rollback,” in which every area of the underground facility is being tested and characterized for radiation contamination. A map is emerging showing which areas are safe and which are not, with buffer zones labeled in between.

So far, so good. It’s the next step that worries me:

Let’s say you smoke a lot of crack, crash your car and wake up in jail. As part of a plea agreement, you have to outline a recovery plan. If your recovery plan seems to focus on how soon you can resume smoking crack, you may have a couple of problems.

By day, I work for a call center. In my spare time, I try to save my hometown (and planet) from a nearly constant onslaught of greedheads, lunatics and land developers. I live in a fictional town called Austin, Texas, where I go to way too many meetings.
View all posts by Robert Singleton →
This entry was posted in Department of Energy, Radiation leak, Waste Isolation Pilot Plant and tagged Department of Energy, nuclear waste, radiation leak, United States, Waste Isolation Pilot Plant. Bookmark the permalink.