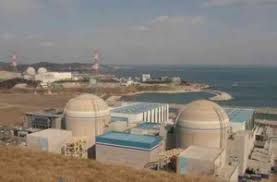 (A little note about names: Gori is the village where the reactors usually known as the Kori plant are located.)

The Gori-2 nuclear power plant, about 450 kilometers southeast of Seoul, was manually shut down at about 3:54 p.m. No immediate threats of a radiation leak have been detected, according to the Korea Hydro and Nuclear Power Co. (KHNP).

“As excessive water flowed into a building that takes in seawater to cool down turbine steam, we decided to manually halt the operation of the nuclear reactor for the safety of the electrical equipment,” the KHNP said.

Heavy rain pummeled Busan, where the nuclear reactor is located, and its surrounding area on Monday, with rain falling at a maximum rate of 130 millimeters (over 5 inches) per hour.

By day, I work for a call center. In my spare time, I try to save my hometown (and planet) from a nearly constant onslaught of greedheads, lunatics and land developers. I live in a fictional town called Austin, Texas, where I go to way too many meetings.
View all posts by Robert Singleton →
This entry was posted in Flooding, South Korea and tagged flooding, Kori, nuclear power, South Korea. Bookmark the permalink.