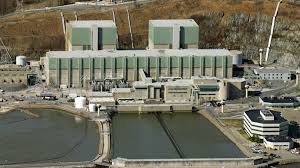 The Peach Bottom nuclear power plant in Pennsylvania reported that both trains of the Emergency Service Water (ESW) system were inoperable “due to a pin-hole, through wall piping leak.” The leak was discovered Saturday afternoon, and affects the safety of both reactors at the site.

According to the Event Report:

…this event is being reported as an event or condition that could have prevented the fulfillment of the safety function of systems that are needed to shut down the reactor and maintain it in a safe shutdown condition, remove residual heat and mitigate the consequences of an accident.

This raises a couple of questions:

1. This could simply be a case of inaccurate writing, but the paragraph above says reactor rather than reactors, even though the Event Report clearly says that the ESW leak affects both Unit 2 and 3. (Unit 1 was an experimental helium-cooled reactor that was decommissioned in 1974.)

2. Let’s hope nothing catastrophic occurs while the ESW is out of service, as Peach Bottom says that the reactors could not currently be shut down safely.

While the leak is being investigated, Peach Bottom asked and received permission from the Nuclear Regulatory Commission (NRC) to continue to operate both reactors. The OK from the NRC is called a Notice of Enforcement Discretion (NOED). Both reactors are listed as being at 100 per cent output on this morning’s Power Reactor Status Report on the NRC website.

Peach Bottom’s two operating reactors are among the oldest in the United States, having come online in 1974. Both reactors are Mark I General Electric Boiling Water Reactors, the same model that exploded and melted down during the Fukushima disaster in 2011. They also use the same type of containment building that failed at Fukushima.

By day, I work for a call center. In my spare time, I try to save my hometown (and planet) from a nearly constant onslaught of greedheads, lunatics and land developers. I live in a fictional town called Austin, Texas, where I go to way too many meetings.
View all posts by Robert Singleton →
This entry was posted in Co-location, Coolant leak, Event Reports, Nuclear Regulatory Commission, Peach Bottom and tagged coolant leak, Event Reports, nuclear power, Nuclear Regulatory Commission, Peach Bottom, Pennsylvania, United States. Bookmark the permalink.