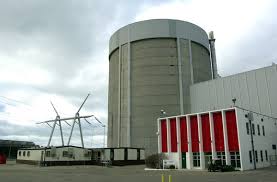 The Kalamazoo Gazette published an in-depth look at safety at the Palisades nuclear power plant on the shores of Lake Michigan. Kalamazoo, Michigan, is about 40 east of Palisades. The Gazette reported this morning:

Palisades is one of the oldest nuclear power plants in the country and it is also one of the most “embrittled,” putting it at risk of cracking.

Embrittlement is the loss of ductility — the ability to bend without cracking — caused by neutrons bombarding the metal of the reactor walls over time.

It happens to all reactors, but the issue is considered especially crucial in reactors built before 1972, such as Palisades. Those vessels were built using copper — which is no longer used in reactor construction because it is more prone to embrittlement — in the walls and welds.

Embrittled reactors are at particular risk during emergency operations:

Pressurized water reactors like Palisades, once embrittled, are considered to be at a greater risk for something known as pressurized thermal shock.

This wouldn’t occur during normal operations, but could occur if there were an accident and a large amount of cold water needed to be injected into the reactor. If this happened and the vessel walls cooled too rapidly, they might crack, “potentially challenging the vessel’s integrity,” the NRC says.

The NRC estimates that both the Point Beach 2 reactor, located on the shores of Lake Michigan in Wisconsin, and Palisades are expected to reach the traditional embrittlement screening limits in 2017.

Of the rest of the five most embrittled reactors, Diablo Canyon 1 in California is expected to reach those limits in 2023, Indian Point 3 in New York in 2025 and Beaver Valley 1 Pennsylvania in 2033.

The Nuclear Regulatory Commission (NRC) has responded to the issue of embrittlement by softening standards. According to the Gazette:

The NRC created a second, “augmented” set of guidelines on embrittlement, ( Kirk said. The Alternative Pressurized Thermal Shock Rule took effect in 2010, according to Entergy’s filing.

The alternative rules got rid of some of the padding of the original rules, (according to Mark Kirk, a senior materials specialist at the Nuclear Regulatory Commission,) which he characterized as deliberately conservative. The alternative offered a path for licensees of aging reactors, such as Palisades, to continue operating after hitting the original embrittlement limits.

Some NRC critics point to the new guidelines as an example of the NRC lowering its standards, once it became clear that the country’s aging nuclear fleet was going to bump up against those limits faster than anticipated.

“The NRC seems fine with enabling plants like Palisades,” said Kevin Kamps, of the anti-nuclear watchdog group Beyond Nuclear, which is pushing for the plant to shut down.

…in 2013, Shearon Harris Nuclear Plant in North Carolina was shut down after a crack and corrosion was discovered in its reactor vessel.

According to news reports, the NRC said that the crack did not go all the way through the reactor vessel and there was no indication that radiation was released.

In that instance, that reactor had ultrasonic tests performed on the vessel during a refueling shutdown — similar to the kind performed on the reactor at Palisades last winter. But the crack wasn’t discovered until secondary testing discovered primary water stress corrosion cracking on a nozzle located near a weld.

There is another method of assessing the likelihood that a reactor is nearing the end of its life, and it involves an extreme form of couponing:

Another way of testing the embrittlement of a reactor vessel is to pull the “coupons,” metal tags that were placed inside surveillance capsules lining the inside perimeter of U.S. reactors before they came online. Those samples, Kirk said, are comprised of the same metal used when constructing the reactor.

Because they are closer to the fuel, they age faster than the walls of the reactor, offering regulators a sense of how quickly the vessel will become embrittled.

Opponents of Palisades would like to see an analysis of the remaining coupons:

Kamps of Beyond Nuclear and other anti-nuclear groups in Southwest Michigan said that they would like to see one of the four sets of coupons pulled, to test further the level of embrittlement of the reactor.

There has been a significant gap in coupon testing at Palisades:

The next set isn’t scheduled to be pulled until 2019.

When asked about the 19-year gap, Kirk said that the NRC has enough data on the reactor’s aging process from past capsules to be comfortable with its calculations that the core of the Palisades reactor will remain safe “well beyond” 2031, when the plant’s license is set to expire.

By day, I work for a call center. In my spare time, I try to save my hometown (and planet) from a nearly constant onslaught of greedheads, lunatics and land developers. I live in a fictional town called Austin, Texas, where I go to way too many meetings.
View all posts by Robert Singleton →
This entry was posted in Embrittlement, Nuclear Regulatory Commission, Palisades and tagged embrittlement, Michigan, nuclear power, Nuclear Regulatory Commission, Palisades, United States. Bookmark the permalink.