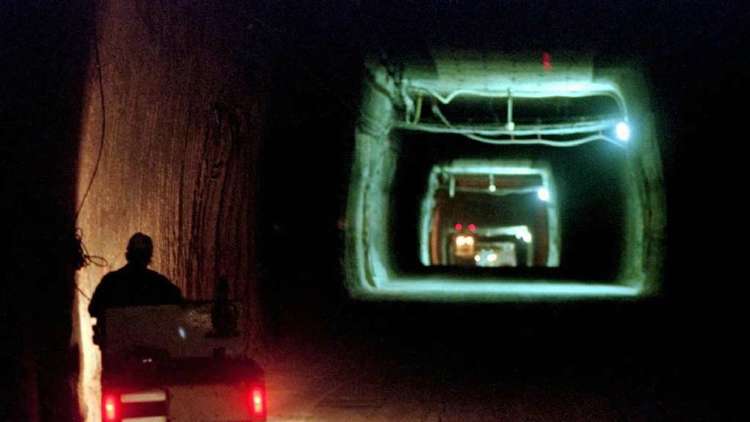 The Los Angeles Times ran a Q & A piece today on the February accident and radioactive release at the Waste Isolation Pilot Plant in New Mexico. Most of the questions were ignorant, and the answers ranged from simplistic to flat-out wrong. However, the article did have a nice, creepy picture from somewhere under New Mexico, and a question on a completely unrelated issue that I’ve been worried about for some time.

Why can’t the U.S. shoot nuclear waste into space?

About 1% to 5% of all rockets malfunction on launch, meaning tons of radioactive debris would be spread all over Earth. The cost of launching this heavy material would also be prohibitive.

Please remember that 1 to 5 per cent malfunction rate, as we’ll surely here that “Why can’t we just shoot that stuff into space?” solution again and again and again.

But what I really wanted to talk about was this. The West Coast’s Paper of Record failed to mention that most deep-space missions carry radioisotope thermoelectric generators, or RTG’s for short. The devices are used to generate electricity to keep the instruments on spacecraft from freezing. RTG’s can contain signfiicant amounts of dangerous radioactive material. For example, the Cassini-Huygens unmanned spacecraft, launched on a journey to Saturn in 1997, contained an RTG that contained 73 pounds of plutonium.

But the Cassini-Huygens probe didn’t go straight to Saturn. In order to build up enough momentum to reach Saturn in a reasonable amount of time, the mission called for a series of ‘sling-shot’ maneuvers where it whipped around a series of planets. The first two fly-arounds took Cassini around Venus. At the end of the Venus sling-shot, Cassini-Huygens headed back toward Earth.

So we had a school bus-sized spacecraft with enough plutonium on board to shorten all our life-spans headed toward the Earth at, as I remember, about 50,000 miles per hour. It gets worse, though. After whipping around Venus and heading for Earth, NASA lost contact with the spacecraft for awhile. The probe eventually figured out where it was and, on August 18, 1999, Cassini-Huygens passed by the Earth at a distance of 728 miles and continued on to Jupiter, where it performed another sling-shot, picking up more speed for the trip to Saturn.

How bad could it have been if Cassini had been off-course and entered the Earth’s atmosphere? Depends on who you ask. Nuclear expert Dr. Helen Caldicott has said that one pound of plutonium, evenly dispersed, could give cancer to virtually everyone on the planet. NASA is more conservative, but pretty frightening. Their environmental impact statement says that a worst case accident involving re-entry of the Cassini-Huygens spacecraft would have exposed virtually everyone on the planet to excess radiation, resulting in 5000 additional cancer deaths. NASA really tortured the data, saying that one billion of the exposed would die of cancer, but most of those deaths were from cancers that would have occurred anyway.

Is there any evidence that spacecraft with radioactive material on board have malfunctioned and crashed back to Earth? (Sorry, I’m borrowing the L.A. Times in asking myself questions and then answering them.) Why yes, there might be. A Russian spacecraft, with the decidely Not-Ready-for-Prime-Time name Phobos-Grunt, failed on launch on November 8, 2011, and crashed back to Earth. Phobos-Grunt (Grunt means dirt in Russian, the mission being designed to return dirt from Mars’ moon Phobos) contained a thermal generator called a Sistema Obespecheniya Teplovogo Rezhima, or SOTR for short. What type of radioisotope the Russians used and how much is a state secret. I wrote about this a couple of times in 2011.

Sorry to go on about the routine launch of dangerous materials into space and the number of things that might come whizzing through your roof at any hour of the day or night. Just something to keep you from sleeping well tonight….

By day, I work for a call center. In my spare time, I try to save my hometown (and planet) from a nearly constant onslaught of greedheads, lunatics and land developers. I live in a fictional town called Austin, Texas, where I go to way too many meetings.
View all posts by Robert Singleton →
This entry was posted in Cassini-Huygens, NASA, Nuclear waste, Radioisotope Thermoelectric Generators, spacecraft, Waste Isolation Pilot Plant and tagged Cassini-Huygens, NASA, nuclear waste, Phobos-Grunt, United States, Waste Isolation Pilot Plant. Bookmark the permalink.