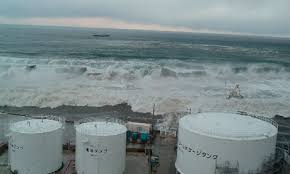 The Asahi Shimbun reported this morning:

Fukushima Prefecture is set to accept the construction of an interim facility to store radioactive waste from cleanup work due to the nuclear disaster, advancing the stalled process of decontaminating the affected areas.

Negotiations for the land acquisition had been held up by the appraised value of the land:

The prefectural government has decided to shoulder the difference between the appraised value of land in Okuma and Futaba, where the structure will be built, and the price it would have fetched before the 2011 accident at the Fukushima No. 1 nuclear power plant.

The decision came after landowners insisted that the land should be bought at a fair market value because the current appraisals are much lower than pre-disaster estimates.

Which raises the obvious answer to the question: “What could possibly go wrong?” The answer is that the land has been hit by an earthquake and a tsunami and irradiated by a nuclear meltdown. Only an idiot would argue that the fact that disaster has previously hit the area makes it less likely that it will happen again. Instead, the three-part disaster demonstrates that the region is susceptible to such accidents.

By day, I work for a call center. In my spare time, I try to save my hometown (and planet) from a nearly constant onslaught of greedheads, lunatics and land developers. I live in a fictional town called Austin, Texas, where I go to way too many meetings.
View all posts by Robert Singleton →
This entry was posted in Fukushima, Japan, TEPCO and tagged fukushima, Japan, nuclear power, TEPCO. Bookmark the permalink.