Update: Fitch downgrades credit outlook for SCANA to negative as a result of construction delay in V.C. Summer nuclear expansion 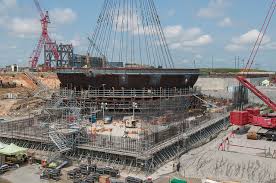 As I reported early last week, construction of two new reactors at the V.C. Summer nuclear power plant has been pushed back a year. Now, it looks as if the delay has had an impact on Summer’s owners’ credit rating. As Dow Jones’ MarketWatch reported last Friday:

Fitch Ratings has affirmed at ‘BBB+’ the Issuer Default Ratings (IDR) and instrument ratings for SCANA Corp. (SCG) and its largest subsidiary, South Carolina Electric and Gas Co. (SCE&G). Fitch has also revised the Rating Outlook for each entity to Negative from Stable.

MarketWatch singled out the delay in construction as the most significant factor in the downgrade:

he Negative Rating Outlook for SCG and SCE&G reflects the heightened regulatory and financial risk of SCE&G’s nuclear construction program following the announcement of a longer than expected delay in the construction schedule and the uncertain cost impact. With the most recent delay, SCE&G will most likely exceed the cost and 18-month schedule contingency previously approved by the South Carolina Public Service Commission (PSC), making full cost recovery less certain.

Fitch also pointed to cost overruns in the project as contributing to the credit downgrade:

Fitch is particularly concerned about the extent of the potential cost increase and the PSC’s willingness to have rate payers shoulder the entire burden.

By day, I work for a call center. In my spare time, I try to save my hometown (and planet) from a nearly constant onslaught of greedheads, lunatics and land developers. I live in a fictional town called Austin, Texas, where I go to way too many meetings.
View all posts by Robert Singleton →
This entry was posted in AP-1000 reactor, Construction delays, Summer nuclear plant and tagged credit rating, Fitch, nuclear power, SCANA, South Carolina, Summer, United States. Bookmark the permalink.