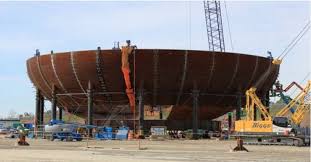 Earlier today, I told you about the delay in construction of the new units at the V. C. Summer nuclear power plant in South Carolina. Later, I found this South Carolina’s Post and Courier, giving further details into why the project is falling behind:

…SCE&G pushed back the completion of the first of the new reactors at V.C. Summer from March 2017 to late 2017 or early 2018, blaming manufacturing delays at a vendor in Lake Charles, La.

At issue are huge, heavy components known as “submodules” that go inside the main containment vessels. Until those are delivered and lifted into place, other critical construction projects at V.C Summer can’t proceed, Byrne said.

“It is constraining other milestones,” he said.

Missing the construction milestones will also make it necessary to go back to the South Carolina Public Utility Commission:

SCE&G also must go back to the S.C. Public Service Commission for approval of a new construction schedule because some of the 46 remaining “milestone” projects won’t be finished in time, Byrne said.

By day, I work for a call center. In my spare time, I try to save my hometown (and planet) from a nearly constant onslaught of greedheads, lunatics and land developers. I live in a fictional town called Austin, Texas, where I go to way too many meetings.
View all posts by Robert Singleton →
This entry was posted in Construction delays, Nuclear Renaissance, SCANA, Summer nuclear plant, Uncategorized and tagged construction delays, nuclear power, Nuclear renaissance, SCANA, South Carolina, Summer, United States. Bookmark the permalink.