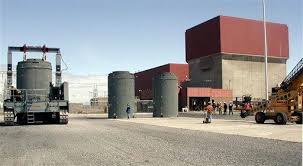 The FitzPatrick nuclear power plant in Oswego County has been operating at reduced power since mid-June to compensate for persistent leaks in the plant’s aging cooling system that have plagued the facility for the past two years.

Entergy Corp., owner of the 39-year-old nuclear plant, cut power output to about 85 percent of capacity in mid-June to try to reduce the frequency of leaks in its condenser.

It’s more than a couple of leaks:

The condenser, which circulates water from Lake Ontario to cool the reactor, sprouted leaks on average nearly once a week during the first six months of this year, each time forcing plant operators to reduce power until the leaks could be plugged.

Think that’s a lot of leaks? So does the Nuclear Regulatory Commission:

During the first six months of 2014, Entergy was forced to reduce power 21 times to plug condenser leaks, according to NRC inspection reports. From April through June, the facility endured unplanned power reductions at a rate of 23 per 7,000 hours of operation, far exceeding the NRC’s recommended limit of six.

Entergy will attempt to fix the problem during an upcoming refueling outage:

Entergy officials have said they plan to replace all the condenser tubes during a refueling outage scheduled to begin next month. Crews will replace the existing brass condenser tubes with titanium tubes designed to be resistant to Lake Ontario sediments, which are abrasive and contribute to leaking, said Tammy Holden, speaking for Entergy.

Kind of makes you think that they should had used aluminum tubes from the get-go, doesn’t it?

By day, I work for a call center. In my spare time, I try to save my hometown (and planet) from a nearly constant onslaught of greedheads, lunatics and land developers. I live in a fictional town called Austin, Texas, where I go to way too many meetings.
View all posts by Robert Singleton →
This entry was posted in Entergy, FitzPatrick, Nuclear Regulatory Commission and tagged Entergy, FitzPatrick, leak, New York, nuclear power, United States. Bookmark the permalink.