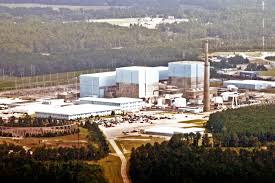 1. Yesterday morning, operators at Florida’s Turkey Point nuclear power plant initiated a scram, or rapid shutdown, of the Unit 3 reactor following a loss of air flow and incresing pressure within the steam lines. The shutdown resulted in the activation of the reactor’s auxiliary feedwater system to provide emergency cooling. A little over an hour into the event, other cooling systems activated and the reactor’s emergency diesel generators started. Additional cooling was provided through opening of the atmospheric steam dump valves. Cause of the incident is under investigation.

Turkey Point has had problems in the last two weeks with increasing temperatures in the series of canals that serve as the Ultimate Heat Sink for the facility’s two reactors. Perhaps taking one reactor offline will reduce the amount of hot water discharged from the plant into the canals.

2. And, at 5:04 this morning, the Brunswick nuclear power plant in North Carolina declared an Unusual Event due to a halon discharge in the facility’s simulator. According to the Event Report: “This potentially affects access and habitability of the Technical Support Center and the Emergency Operations Facility.” Halon gas is used in the plant’s fire suppression system. As of the time of the Event Report, it was not known if the activation of the suppression system was the result of a fire. The facility’s fire brigade was dispateched to investigate.

By day, I work for a call center. In my spare time, I try to save my hometown (and planet) from a nearly constant onslaught of greedheads, lunatics and land developers. I live in a fictional town called Austin, Texas, where I go to way too many meetings.
View all posts by Robert Singleton →
This entry was posted in Brunswick, Event Reports, Nuclear Regulatory Commission, Reactor problems, Turkey Point and tagged Brunswick, Event Reports, Florida, North Carolina, nuclear power, Nuclear Regulatory Commission, reactor problem, Turkey Point, United States. Bookmark the permalink.