Posted on August 9, 2014 by Robert Singleton 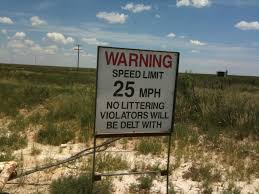 Loving County is big, dry and stretches for miles, and is the perfect place, local officials say, to store high-level radioactive waste.

Officials here hope to entice the federal government — with $28 billion to spend on the disposal of high-level radioactive waste — into considering the possibility.

County officials are already dreaming of ways to spend the money they say the project would generate:

“With the money that this would generate for the county, we might even be able to pay the taxpayers back,” said the county judge, Skeet Jones. “We could build some roads. We could bring in some more water. We could have a town that’s incorporated, have a city council, maybe even start a school.” Loving County had a school, but it has been boarded up for years, and students are bused to neighboring Winkler County.

“Maybe even have a Walmart,” Mr. Jones mused.

Before you feel too sorry for the residents of Loving County, you should know three things:

Loving County’s plans don’t stop at storage, however. As the Times reported:

The cancellation of the federal government’s plan to bury high-level radioactive waste at Yucca Mountain in Nevada means that the waste will remain at about 70 reactor sites around the country until there is some other plan. Loving County has visions of storing spent fuel from closed reactors in aboveground casks, and later, building a processing plant that would recover unused uranium, and plutonium for reuse, making the rest easier to bury. County officials are working with a company that is hoping to negotiate a deal with the state and federal governments.

There are concerns that, once attempted, high-level nuclear waste might never leave the state:

“Interim” storage, though, would mean adding a cumbersome job: shipping the fuel a second time, for burial. Or maybe not. “If we let this waste into Texas, it’s likely never to be shipped anywhere else, because nobody really wants it,” said Tom Smith, an energy advocate at Public Citizen in Austin.

And, it looks as if the skids under the project are being greased. According to the Times:

In Loving’s case, two lawyers in Austin, Monty G. Humble and Bill Jones, raised the idea with Gov. Rick Perry, who Mr. Humble said was “not opposed,” and then went shopping for a county that would be interested.

Humble and Jones have been busy:

Mr. Humble, who specializes in energy topics, and Bill Jones, who was Mr. Perry’s first general counsel, formed a company, Advanced Fuel Cycle Initiatives, and have been negotiating with a landowner in the county. The county has designated the two as its agents in Austin, and the two are seeking the same designation from the State of Texas in order to negotiate with the Department of Energy over terms of a lease, including research grants to Texas universities, new roads and emergency equipment for towns in the area.

The state government is also moving on the idea:

Mr. Perry has ordered a state study of the storage idea. “I believe it is time for Texas to act,” he wrote in a letter in March, partly because New Mexico was considering a site within 50 miles of the Texas border. The speaker of the Texas House had also ordered a committee to study the matter.

And there’s a plan underway to see that the spent fuel remains in Texas:

Mr. Humble said he believed he had solved the problem of assuring that the waste in Loving County was moved into permanent storage in 20 or 30 years. Rent would be raised sharply after a certain date, he said, and if the federal government still did not remove the waste, Texas would reserve the right to bury it within the state. His choice would be Deaf Smith County, southwest of Amarillo, which the Department of Energy was considering until Congress picked Yucca Mountain.

A certain fatalism hangs over the project:

In Loving, Raymond Wildman, the cashier at Hopper Station, a gas station and convenience store that is also the county’s only retail outlet, offered another reason that could make a West Texas site attractive. Given the low population, he said, “We wouldn’t be missed if something happened.”

By day, I work for a call center. In my spare time, I try to save my hometown (and planet) from a nearly constant onslaught of greedheads, lunatics and land developers. I live in a fictional town called Austin, Texas, where I go to way too many meetings.
View all posts by Robert Singleton →
This entry was posted in Department of Energy, High-level nuclear waste, Spent nuclear fuel, TX, Uncategorized and tagged Department of Energy, high-level nuclear waste, Loving County, spent nuclear fuel, texas. Bookmark the permalink.