Posted on August 7, 2014 by Robert Singleton 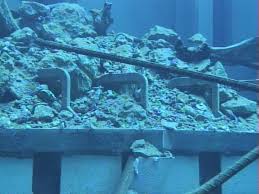 Tokyo Electric Power Co. (TEPCO) said Wednesday that its new estimate shows that all the fuel rods in reactor 3 at the Fukushima No. 1 nuclear power plant apparently melted down and fell onto the bottom of the containment vessel.

In November 2011, the company had said it believed only about 63 percent of reactor 3′s fuel core had melted.

The new estimates are based on when the High Pressure Coolant Injection (HPCI) system stopped providing cooling water to the crippled reactor:

The revised estimate is based on the finding that an emergency cooling system, known as HPCI, of reactor 3 stopped working six hour earlier than previously thought, and that the meltdown had also started more than five hours earlier.

The new report also indicates that all the fuel in reactor 3 melted through the pressure vessel and penetrated more than two feet into the containment structure:

According to the new estimate, all the melted fuel penetrated the pressure vessel, fell onto the bottom of the containment vessel and melted about 68 cm (27 inches) into the concrete.

By day, I work for a call center. In my spare time, I try to save my hometown (and planet) from a nearly constant onslaught of greedheads, lunatics and land developers. I live in a fictional town called Austin, Texas, where I go to way too many meetings.
View all posts by Robert Singleton →
This entry was posted in Fukushima, Meltdown, TEPCO and tagged fukushima, Japan, meltdown, nuclear power, TEPCO. Bookmark the permalink.