Posted on August 4, 2014 by Robert Singleton 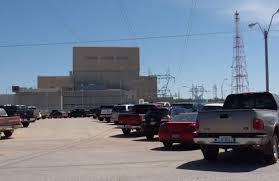 1. Friday evening, personnel at Louisiana’s River Bend nuclear power plant were conducting a test of the High Pressure Core Spray (HPCS) when a leak was discovered in a valve between the HPCS and the Condensate Storage Tank. In the Event of a Loss of Coolant Accident (LOCA,) the HPCS would be aligned to the suppression pool. According to the Event Reports:

…engineering personnel noted that the observed leakage past the two MOVs (motor operated valves) might be sufficient to deplete suppression pool inventory such that it would not be capable of performing its specified function for the duration of the 30 day mission time. The issue of concern is that once HPCS is aligned to the suppression pool post-LOCA, pool inventory would be lost to the CST through the leaking test return valves.

As a result, the HPCS was declared inoperable.

2. And the Cooper nuclear power plant in Nebraska posted this today:

The Omaha World-Herald provided this additional detail this morning:

National Weather Service personnel Sunday were updating wording that is programmed into a computer system when the alert was mistakenly broadcast, NPPD said.

By day, I work for a call center. In my spare time, I try to save my hometown (and planet) from a nearly constant onslaught of greedheads, lunatics and land developers. I live in a fictional town called Austin, Texas, where I go to way too many meetings.
View all posts by Robert Singleton →
This entry was posted in Cooper, Event Reports, Nuclear Regulatory Commission, River Bend and tagged Cooper, Event Reports, Louisiana, Nebraska, nuclear power, Nuclear Regulatory Commission, River Bend, United States. Bookmark the permalink.