Be Afraid. Be a Little Afraid: NRC finds security violation or violations at Pennsylvania nuke, but declines to say what they are 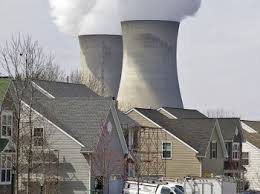 Lansdale, PA’s The Reporter carried a story earlier today about the results of an inspection at the Limerick nuclear power plant:

The federal government has identified a security problem at Exelon’s Limerick Generating Station but because it’s a security matter, officials can’t say what it is.

According to a Nuclear Regulatory Commission (NRC) letter issued Tuesday to Exelon, the problem or problems were identified during a June 20 inspection of the nuclear plant.

Okay, so how worried should we be?

NRC spokesman Neil Sheehan explained that his agency uses a color code to indicate the severity of an issue at a nuclear plant, green being the lowest, on to white, then yellow and then red.

“But in the area of security, after many years of debate, the commission decided that we would let the public know if an inspection finds a security problem at a plant near them, but that we wouldn’t be specific other than to announce it as being above a very low level,” Sheehan said.

“The reason being that if you are a terrorist, and you’re looking across the nuclear power plant landscape, you might conclude it is better to go after a plant that has a yellow or red security issue, as opposed to one that doesn’t have anything flagged at all,” explained Sheehan.

Ever eager to be helpful, the NRC assessed the situation in terms of what it isn’t.

…the unnamed security problem inspectors identified at the Limerick Generating Station is being characterized on the color code scale only as “greater than green.”

That’s the NRC’s way of saying ‘bigger than a breadbox.’

If Exelon does decide to contest the finding, a meeting with NRC must occur within 30 days, Sheehan said.

Following that, the NRC will issue a final determination in the matter which may involve increased oversight at the plant.

“The finding is also an apparent violation of NRC requirements and is being considered for escalated enforcement action,” according to the letter from James Trapp, acting director of NRC’s division of reactor safety, to Michael Pacillio, senior vice president at Exelon and its chief nuclear officer.

Sheehan spelled out the timetable for further NRC action:

Sheehan said a public announcement on a final NRC determination about the matter should be issued “within the next two months” whether Exelon appeals the determination or not.

By day, I work for a call center. In my spare time, I try to save my hometown (and planet) from a nearly constant onslaught of greedheads, lunatics and land developers. I live in a fictional town called Austin, Texas, where I go to way too many meetings.
View all posts by Robert Singleton →
This entry was posted in Limerick, Nuclear Regulatory Commission, Security and tagged Limerick, nuclear power, Nuclear Regulatory Commission, Pennsylvania, Security, United States. Bookmark the permalink.

1 Response to Be Afraid. Be a Little Afraid: NRC finds security violation or violations at Pennsylvania nuke, but declines to say what they are