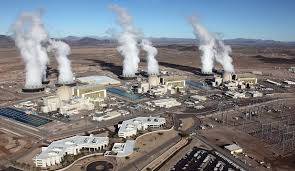 Energy companies need to change the way they produce power otherwise drinking water will become a scarce commodity for the world’s population by 2040.

As soon as 2020, between 30% to 40% of people around the world won’t have access to drinking water unless the competing issues of creating energy and supplying clean water are addressed, according to research by a team from Aarhus University in Denmark and the US’s Vermont Law School and CNA Corporation.

The amount of water used for power generation in the United States is staggering:

Thermal power plants in the US used as much water as farms did in 2005, and more than four times as much as all US residents….

In 2008, power plants in the US withdrew 60 to 170 billion gallons of freshwater every day from rivers, lakes, streams and aquifers, while using 2.8 to 5.9 billion gallons.

The difference, 57.2 to 164.1 billion gallons per day, is the amount of water lost to evaporation in the cooling process.

The new study has some recommendations to remedy the situation:

The researchers made six general recommendations for decision-makers to follow in order to alter the present system.

They said there needs to be an improvement in energy efficiency, an investment in solar energy, a strong focus on wind energy, improved research into alternative cooling cycles, a better overview as to how much water is used by power plants, and to stop the use of fossil fuel facilities in parts of the world that have a lack of water.

By day, I work for a call center. In my spare time, I try to save my hometown (and planet) from a nearly constant onslaught of greedheads, lunatics and land developers. I live in a fictional town called Austin, Texas, where I go to way too many meetings.
View all posts by Robert Singleton →
This entry was posted in Water and tagged nuclear power, water. Bookmark the permalink.