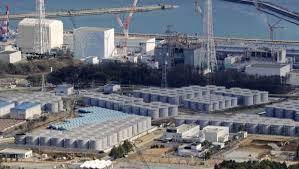 Roughly 20 or more of the water tanks holding radioactively contaminated water at the Fukushima No. 1 Nuclear Power Plant are secondhand, it has been learned — a fact that plant owner Tokyo Electric Power Co. (TEPCO) had not previously disclosed.

In August 2013, highly radioactive water was found leaking from one of the plant’s tanks. A TEPCO representative refused to comment on whether that tank was one of the used ones.

The secondhand tanks and the tank that leaked are all types assembled by bolting steel pieces together, known as “flange” models.

TEPCO says that the used tanks should last for five years, but this may not be the case. As the Mainichi Shimbun reported:

…an inside source with a Tokyo company that supplied TEPCO with the tanks told the Mainichi, “We don’t guarantee the tanks for five years as a company, and they are not made to be completely leak-proof in the first place.”

The tanks had not been designed for water storage in the first place:

According to the source, TEPCO ordered tanks from the company in Tokyo’s Chuo Ward after the March 2011 Great East Japan Earthquake to store contaminated water, but since it would take too much time to make new ones, in around May 2011, the manufacturer supplied TEPCO with 20 to 30 used flange tanks — mud-storage tanks that it had been renting out to businesses such as construction firms.

One of the flange tanks leaked in August 2013:

In the August 2013 incident at the Fukushima plant, around 300 tons of contaminated water was found to have leaked from a flange tank. Criticism grew over the fact that this tank had been taken apart, reassembled and moved on the plant grounds before the leak occurred. At a news conference around this time TEPCO said that this tank and two others had been relocated, but it made no mention of secondhand tanks.

By day, I work for a call center. In my spare time, I try to save my hometown (and planet) from a nearly constant onslaught of greedheads, lunatics and land developers. I live in a fictional town called Austin, Texas, where I go to way too many meetings.
View all posts by Robert Singleton →
This entry was posted in Fukushima, Japan, Radiation leak, TEPCO and tagged fukushima, Japan, nuclear power, radiation leak, TEPCO. Bookmark the permalink.