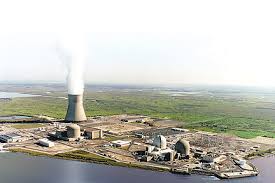 Bolts that failed by the dozen inside four Salem Unit 2 reactor coolant pumps, idling the plant for months, were made of a metal alloy deemed unsuitable for nuclear reactors as long ago as 1984, industry and Nuclear Regulatory Commission filings show.

Manufacturer Westinghouse Electric Co. determined that parts loosened by bolt failures could have created a “substantial safety hazard” at the plant along the Delaware River had they suddenly locked up rapidly spinning parts in one or more of the 30-foot-tall coolant pumps, according to Neil Sheehan, a regional NRC spokesman.

Sheehan added that although Westinghouse considered a pump freeze-up “extremely unlikely,” it considered it “prudent” to formally report the bolt issue Tuesday to the NRC and the owner of two other reactors near Newport News, Virginia, where the same bolts are still in use.

The result? Damage to the impellers:

In three of the four damaged units, large metal assemblies that redirect water flows dropped from their regular positions just above water-moving impellers when retaining bolts broke or sheared off. In two of those three pumps, Westinghouse said, diffusers made contact with the impellers, which spin at thousands of rotations per minute.

Here’s a link to the Delaware Online story: http://www.delawareonline.com/story/news/local/2014/07/15/warnings-salem-type-bolt-troubles-go-back-decades/12698267/

By day, I work for a call center. In my spare time, I try to save my hometown (and planet) from a nearly constant onslaught of greedheads, lunatics and land developers. I live in a fictional town called Austin, Texas, where I go to way too many meetings.
View all posts by Robert Singleton →
This entry was posted in Reactor problems, Salem and tagged New Jersey, nuclear power, Salem, United States. Bookmark the permalink.