Georgia nuclear expansion is behind schedule and over budget, according to state Public Service Commission report 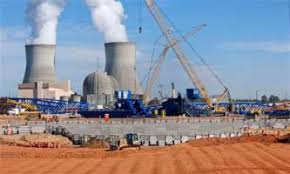 The companies building one of the first U.S. nuclear plants in a generation have missed project deadlines, and government monitors questioned in reports released Monday whether those delays could grow.

Southern Co. subsidiary Georgia Power and its partners are building two more nuclear reactors at Plant Vogtle southeast of Augusta using a first-of-its-kind technology. The construction project was originally estimated to cost $14 billion, but the final price tag is likely to rise.

At stake: The feasibility and cost effectiveness of building new nuclear reactors. According to the Times-Union:

The plant in Georgia and an identical facility under construction in South Carolina are widely viewed as tests of whether the nuclear industry can build new power plants without the big delays and cost overruns common decades ago. Total project costs could jump $2 million every day there is a delay, according to estimates released by state analysts.

The Vogtle project is running considerably behind schedule:

Georgia Power initially projected the first of the two new reactors at Plant Vogtle would be operational in April 2016, but that deadline later slipped to late 2017 or very early in January 2018. The second reactor is supposed to be complete in late 2018.

The report, prepared by the Georgia Public Service Commission, listed a number of kinds of delays:

Nuclear engineer William Jacobs Jr. and Public Service Commission analyst Steven Roetger said in their report released Monday that the companies involved in the project face “many challenges” trying to meet those deadlines.

The latest schedule from the builder only presents detailed steps through December 2015, they said. That incomplete timeline does not entirely make clear how the firms that are designing, building and will own the plant intend to compress the construction schedule to stay on track.

Jacobs and Roetger also said company officials have had trouble accurately forecasting how long it will take to complete construction activities.

Note that none of the delays are caused by regulation.

By day, I work for a call center. In my spare time, I try to save my hometown (and planet) from a nearly constant onslaught of greedheads, lunatics and land developers. I live in a fictional town called Austin, Texas, where I go to way too many meetings.
View all posts by Robert Singleton →
This entry was posted in Construction delays, Nuclear Renaissance, Vogtle and tagged construction delay, expansion, Georgia, nuclear power, United States, Vogtle. Bookmark the permalink.