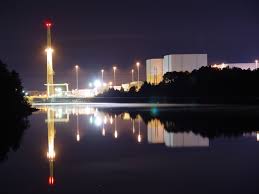 As you are no doubt aware if you are a regular reader of this blog, there have been quite a number of Event Reports this year where a nuclear reactor lost secondary containment by opening two doors at the same time. Today’s NRC Event Notification page has another containment loss story, this time not involving doors.

Upon further investigation a rusted area 2 foot by 2 inches was found on the pipe. Several through wall holes were found in this rusted area and the remainder of the rusted area was allowing water to weep through.

Secondary containment was declared inoperable, but the reactor continues to operate at 100 per cent power.

By day, I work for a call center. In my spare time, I try to save my hometown (and planet) from a nearly constant onslaught of greedheads, lunatics and land developers. I live in a fictional town called Austin, Texas, where I go to way too many meetings.
View all posts by Robert Singleton →
This entry was posted in Brunswick, Event Reports, Nuclear Regulatory Commission and tagged Brunswick, Event Reports, North Carolina, nuclear power, Nuclear Regulatory Commission, United States. Bookmark the permalink.

1 Response to Event Report: Another way to lose secondary containment