Event Reports: Operator error at a research reactor in Colorado, and commercial reactor shutdowns in Georgia, Pennsylvania and New Jersey 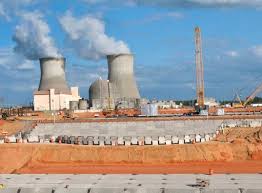 Some items from today’s Event Notification Report page on the NRC website:

2. Also yesterday morning, the Unit 2 reactor at Georgia’s Vogtle nuclear power plant was operating at full power when the Control Room received digital feedwater trouble alarms for all four of the unit’s steam generators. Operators entered the abnormal operating procedures for feedwater malfunction. The technicians attempted to take manual control of the #3 steam generator’s feedwater regulating valve but were unable to raise the feedwater level in the unit. The level in the unit fell to the point where the reactor initiated an automatic shutdown. Both auxiliary feedwater and feedwater isolation actuated on the scram. A forced response team has been set up “…to determine the cause of the low (Steam Generator) water level and determine restart criteria and time of restart.” Vogtle is currently constructing two new reactors to go with the two existing ones at the site.

3. A couple of hours after the Vogtle shutdown, operators were ramping up Unit 1 at the Limerick nuclear power plant in Pennsylvania, following a refueling outage. At 17 per cent power, the Control Room received indications that both the High Pressure Coolant Injection and Reactor Core Isolation Cooling systems were inoperable. The put the reactor into a Technical Specification condition requiring that the unit be shut down or defects be addressed within twelve hours. Two hours into the incident, the two systems were brought back on line and the plant shutdown was terminated. Unit 1 was listed at 20 per cent output on this morning’s Reactor Status Report.

By day, I work for a call center. In my spare time, I try to save my hometown (and planet) from a nearly constant onslaught of greedheads, lunatics and land developers. I live in a fictional town called Austin, Texas, where I go to way too many meetings.
View all posts by Robert Singleton →
This entry was posted in Event Reports, Limerick, Nuclear Regulatory Commission, Reactor problems, Research reactors, Salem, Vogtle and tagged Colorado, Event Reports, Georgia, Limerick, New Jersey, nuclear power, Nuclear Regulatory Commission, Pennsylvania, research reactor, Salem, United States, Vogtle. Bookmark the permalink.