Event Reports: A toxic gas release in Ohio, diesel generators inoperable in New York, a defect in the reactor coolant system in North Carolina, a fire in the turbine building in Illinois and yet another open door in New York 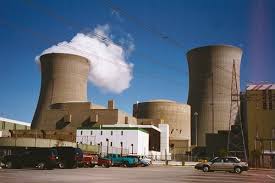 A number of items from today’s Event Notification Report page on the Nuclear Regulatory Commission website:

The facility’s sole reactor continues to operate at 100 per cent output, even though the Event Report characterizes the leak as being a condition “deemed detrimental to the safe operation of the plant.” The reactor at Perry is a General Electric boiling water reactor of the type that failed at Fukushima.

A couple of other points about Perry: It has one reactor, despite the picture showing two cooling towers. The second unit at Perry was approved in 1977, but the plan to build the second reactor was suspended in 1985 and then cancelled in 1994.

The second point about this report is linguistic, and a pet peeve of mine. The leak is in the Off-gas building. Off-gassing is a made-up word that I first encountered to relation to some types of carpet. Apparently, it is supposed to mean “to emit gases,” although I don’t know why you can’t simply say “The carpet tends to emit gases.” Frankly, the word off-gas makes me want to off-vomit.

2. Tuesday morning, there were problems with another aging GE boiling water reactor. The Control Room at New York’s FitzPatrick nuclear power plant received an alarm indicating that an exhaust fan had failed due to thermal overload. The fan provides residual heat removal from the Service Water and Emergency Service Water pump room. The fan failure also left the A and B Emergency Diesel Generators inoperable for roughly 45 minutes. The reactor remained at full power during the incident.

3. Early this morning, technicians at the McGuire nuclear power plant in North Carolina were performing planned inspection of the facility’s Unit 2 reactor, which is currently offline for refueling. The technicians found two flaw indications on a Safety Injection line connected to the Reactor Coolant System. A repair plan is being developed.

4. As I told you yesterday, a fire broke out yesterday afternoon in the Unit 2 turbine building at the Quad Cities nuclear power plant in Illinois. Some more details are provided in the Event Report posted today. The report indicates that the plant did not shut itself down automatically, but instead was manually scrammed by the control room, which also closed the Main Steam Isolation Valves. Unit 2 is currently in Hot Shutdown mode.

5. And it would be an unusual set of Event Reports that didn’t include at least one more incident where somebody opened the wrong door and caused a reactor to lose secondary containment. This week’s winner is the technician at Unit 2 at New York’s Nine Mile Point nuclear power plant, who opened a second airlock leading to the reactor building. Fortunately, the reactor was shut down for refueling at the time of the incident. But, since there was still fuel in the reactor, Nine Mile Point was required to report the incident as one that “could have prevented the fulfillment of the safety function of structures or systems that are needed to mitigate the consequences of an accident.”