Event Reports: Reactor scrams in Mississippi, Nebraska and Alabama, loss of offsite power in Illinois, loss of containment in North Carolina and loss of emergency sirens in Louisiana 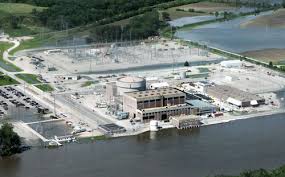 1. Early Monday morning, operators at the Grand Gulf nuclear power plant in Mississippi shut down the facility’s sole reactor due to a steam leak in the turbine building. The unit’s Reactor Core Isolation Cooling system was activated to maintain water level and pressure. Grand Gulf’s reactor was at 41 per cent power at the time of the scram.

2. Monday afternoon, the only reactor at Nebraska’s Fort Calhoun nuclear power plant shut itself down after a turbine trip following a loss of generator cooling water. The Grand Gulf reactor was closed for more than two years beginning in 2011 after a major flood event and regulatory concerns. The reactor was restarted three months ago.

3. Late Tuesday night, Unit 3 at Alabama’s Browns Ferry nuclear power plant had an automatic shutdown after attempts by technicians to adjust fluctuating turbine moisture levels in a turbine moisture separator. The reactor was in the process of ramping up power and was at 35 per cent output when the scram happened.

4. Monday morning, the Unit 1 reactor at the Brunswick nuclear power plant in North Carolina lost containment when both the inner and outer secondary containment airlock doors were open at the same time. A couple of months back, after several such incidents involving loss of containment, I suggested that maybe the solution was something that prevented both doors from being open at the same time. Well, Brunswick had such an arrangement, it just didn’t work. According to the Event Report: “The cause of this event was malfunction of the secondary containment airlock  door interlock.”

5. Also on Monday morning, Louisiana’s Waterford nuclear power plant was notified that four of its emergency sirens were inoperable. One additional siren had been declared inoperable on March 12. Investigation of that incident had also found an additional eight sirens that were not working, bringing the total to 13. Technicians are currently banging wrenches on the affected sirens and scratching their heads in puzzlement.

6. And last Saturday, technicians at the Unit 1 reactor at the Byron nuclear power plant in Illinois activated the unit’s Emergency Diesel Generators after a loss of offsite power. This restored power to all systems except for a chiller system in the control room, which failed to activate on emergency power. The cause of the loss of offsite power is under investigation.

1 Response to Event Reports: Reactor scrams in Mississippi, Nebraska and Alabama, loss of offsite power in Illinois, loss of containment in North Carolina and loss of emergency sirens in Louisiana