Were workers at Waste Isolation Pilot Plant exposed to plutonium? 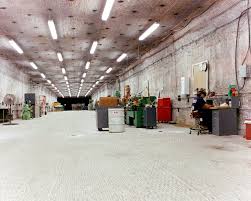 In a rather remarkable case of burying the lead (or at lease moving it to the last six words,) the Los Angeles Times yesterday concluded a paragraph about how the radioactive leak at the Waste Isolation Pilot Plant (WIPP) is causing the Department of Energy to abandon a plan to build a plutonium processing facility in South Carolina with the aside that the leak “exposed 13 workers to airborne plutonium..”

In the immediate aftermath of the Valentine’s Day incident at WIPP, officials of the company that operates the facility only said that americium had been detected in the release, and that 13 workers had been exposed. Based on the fact that the release was americium, officials said that there were only limited risks of adverse health effects to the exposed workers.

Now, new testing has found not that not only americium was released, but also plutonium. A week after the event, ABC News reported:

An underground monitor at the plant near Carlsbad detected airborne radiation late Friday night, and an independent monitor center said Wednesday it found radioactive isotopes in an air sensor a half-mile from the plant.

A filter from a monitor northwest of the plant had trace amounts of americium and plutonium, said Russell Hardy, director of the Carlsbad Environmental Monitoring and Research Center, an arm of New Mexico State University.

Given the fact that a monitor a half mile from the facility found traces of both americium and plutonium, is it logical to assume that the thirteen workers were only exposed to americium?

And here’s the link for the ABC News story: http://abcnews.go.com/US/wireStory/radiation-detected-mexico-nuke-site-22591196

By day, I work for a call center. In my spare time, I try to save my hometown (and planet) from a nearly constant onslaught of greedheads, lunatics and land developers. I live in a fictional town called Austin, Texas, where I go to way too many meetings.
View all posts by Robert Singleton →
This entry was posted in Plutonium, Radiation exposure, Waste Isolation Pilot Plant and tagged plutonium, Waste Isolation Pilot Plant, worker exposure. Bookmark the permalink.