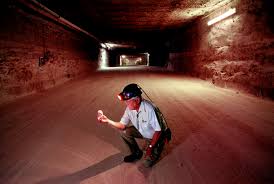 A lot of news outlets are running stories today saying that the DOE has determined that none of the workers at the Waste Isolation Pilot Plant were exposed to dangerous amounts of radiation in the February 14 incident. The Albuquerque Journal added this, however:

WIPP critic Don Hancock, of the Southwest Information and Research Center in Albuquerque, complained that the tests, of the employees’ urine, would not have detected some types of radioactive lung exposure in the workers.

By day, I work for a call center. In my spare time, I try to save my hometown (and planet) from a nearly constant onslaught of greedheads, lunatics and land developers. I live in a fictional town called Austin, Texas, where I go to way too many meetings.
View all posts by Robert Singleton →
This entry was posted in Department of Energy, Radiation exposure, Waste Isolation Pilot Plant and tagged New Mexico, nuclear waste, radiation exposure, Waste Isolation Pilot Plant. Bookmark the permalink.