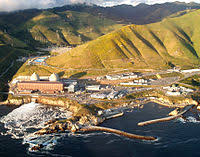 A report by the World Business Academy that details negative health trends in the area surrounding the Diablo Canyon Nuclear Power Plant in San Luis Obispo County was released Monday.

Stephen W. Hosea, MD, the associate director of Internal Medicine Education at Santa Barbara Cottage Hospital, concluded after reading the report that those living near Diablo have higher cancer risks.

“The data contained in this report support a remarkable predisposition of persons living within a 15 mile radius of Diablo Canyon Nuclear Plant to have a significantly increased incidence of various cancers, including thyroid, breast and melanoma,” Hosea said.

And here’s a link to the World Business Academy press release, which has a link to download the full report: http://worldbusiness.org/nuclear-power-health-impact-study/

By day, I work for a call center. In my spare time, I try to save my hometown (and planet) from a nearly constant onslaught of greedheads, lunatics and land developers. I live in a fictional town called Austin, Texas, where I go to way too many meetings.
View all posts by Robert Singleton →
This entry was posted in Cancer, Diablo Canyon and tagged California, cancer, Diablo Canyon, nuclear power, United States. Bookmark the permalink.