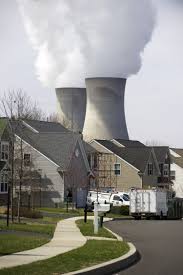 A couple of items from today’s NRC Event Notification page:

2. Yesterday afternoon, radiation monitors at one of the spent fuel pools at the Quad Cities nuclear power plant went off in what was eventually determined to be an invalid activation. However, in response to the monitor activation, both reactor building’s ventilation systems isolated, as well as the control room ventilation system. Unfortunately, the Standby Gas Treatment system was already in operation due to previously planned testing, resulting in a pressure differential and the loss of secondary containment.

As I told you earlier this week, Quad Cities is one of three nuclear plants in Illinois that Exelon has threatened to close unless the state of Illinois adopts a ‘clean energy’ credit that would “recognize the nukes for their clean-air benefits and their dependability as a 24/7 power source.”

By day, I work for a call center. In my spare time, I try to save my hometown (and planet) from a nearly constant onslaught of greedheads, lunatics and land developers. I live in a fictional town called Austin, Texas, where I go to way too many meetings.
View all posts by Robert Singleton →
This entry was posted in Event Reports, Limerick, Nuclear Regulatory Commission, Quad Cities, Reactor problems and tagged Event Reports, Illinois, Limerick, nuclear power, Nuclear Regulatory Commission, Pennsylania, Quad Cities, United States. Bookmark the permalink.