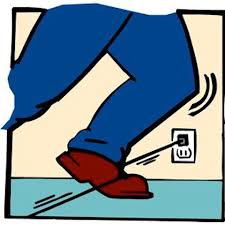 The NRC Event Notification report also said: “The reactor building ventilation radiation monitor went non-functional when the reactor building isolated on the loss of UPS power.” And yet, the report also assered: “All systems functioned as required following the manual scram.” I can only assume from this that plant operators expect a loss of cooling water to the Recirculation pumps, rising temperatures and failure of the radiation monitors whenever there is a loss of power.

Had Republicans in the Senate not blocked consideration of the National Sarcasm Act, Nine Mile Point would have been required to report the incident as failure of the “Uninterruptible” Power Supply. Additionally, the Act would have required Nine Mile officials to make air quote signs and roll their eyes whenever they use the word “Uninterruptible.”

By day, I work for a call center. In my spare time, I try to save my hometown (and planet) from a nearly constant onslaught of greedheads, lunatics and land developers. I live in a fictional town called Austin, Texas, where I go to way too many meetings.
View all posts by Robert Singleton →
This entry was posted in Event Reports, Nine Mile Point, Nuclear Regulatory Commission and tagged New York, Nine Mile Point, nuclear power, Nuclear Regulatory Commission, United States. Bookmark the permalink.