Posted on February 25, 2014 by Robert Singleton 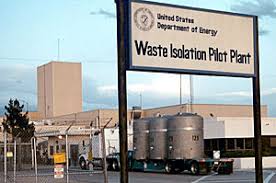 The WIPP site near Carlsbad announced Thursday it will be shut down for at least the next three weeks because of a radiation leak.

Officials with the Waste Isolation Pilot Plant near Carlsbad said radiation leaked from the underground facility into the air last week.

The leak forced the evacuation of the facility.

The cause of the leak is under investigation:

WIPP officials said … they won’t know what caused the leak until they go into the underground facility which isn’t expected to happen for at least three weeks.

The plant will remain closed until the cause of the leak is determined.

In a surprising coda, those officials said what the cause of the leak wasn’t:

WIPP officials said the radiation leak is not connected to an underground fire that happened at the plant two weeks ago.

By day, I work for a call center. In my spare time, I try to save my hometown (and planet) from a nearly constant onslaught of greedheads, lunatics and land developers. I live in a fictional town called Austin, Texas, where I go to way too many meetings.
View all posts by Robert Singleton →
This entry was posted in Radioactive waste, Waste Isolation Pilot Plant and tagged New Mexico, nuclear power, United States, Waste Isolation Pilot Plant. Bookmark the permalink.