Posted on December 14, 2013 by Robert Singleton 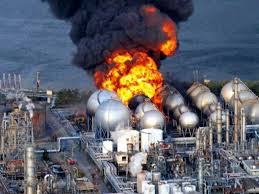 Fire engines were used in a desperate, and ultimately futile, attempt to pump water to cool overheating reactors during the early phase of the 2011 Fukushima No. 1 nuclear power plant disaster, Tokyo Electric Power Co. (TEPCO) said.

According to a Dec. 13 report by the operator of the crippled facility, water was pumped in sufficient quantity to avert core meltdowns in the No. 1, No. 2 and No. 3 reactors, but much of it strayed into irrelevant pipes and ended up elsewhere.

The diversion of water led directly to reactor core meltdowns:

TEPCO said more than seven times the requisite volume of cooling water was pumped into the No. 2 reactor. But the water failed to cool it and the other reactors efficiently, and could not stop the core meltdowns in the No. 1, No. 2 and No. 3 reactors.

An examination of pipe diagrams and related equipment showed the pipes to the reactors had branches leading off to other areas and devices, such as condensation storage tanks. TEPCO concluded that too much of the pumped-in water leaked into those branches and never reached the reactors.

And, worst of all, TEPCO knew about the problem from near the beginning:

TEPCO officials said they knew as early as late March 20 about those leakage routes.

“We should have shared the finding with the public in the belief it would help promote universal safety, but failed to do so,” said TEPCO Managing Executive Officer Takafumi Anegawa.

By day, I work for a call center. In my spare time, I try to save my hometown (and planet) from a nearly constant onslaught of greedheads, lunatics and land developers. I live in a fictional town called Austin, Texas, where I go to way too many meetings.
View all posts by Robert Singleton →
This entry was posted in Earthquake, Explosion, Fire, Fukushima, GE Mark I reactor, Japan, Meltdown, Radiation leak, TEPCO and tagged earthquake, fukushima, Japan, meltdown, nuclear power, TEPCO. Bookmark the permalink.