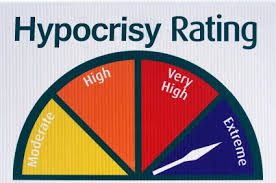 The Wall Street Journal editorial board defended the lackluster performance of the current Congress, writing:

The media are saying that the 113th Congress is on track to be “the least productive” on record—as if that’s bad for the country. Let’s hope gridlock lasts long enough to kill the crony capitalist special known as the wind production tax credit.

Smug, but not hypocritical. The Wall Street Journal argued for the elimination of the wind energy credit, saying:

With more than 60,000 megawatts of generation in the U.S. and utility-scale projects in 39 states, wind-power producers are no longer an “infant industry.” The Department of Energy says that wind power made up 43% of all newly constructed generation in 2012, surpassing even natural gas.

Much of this production is due to the tax credit, which is so generous relative to the wholesale price of electricity that it is distorting energy investment.

Short sighted, but still not hypocritical. What the Journal leaves out of its analysis is that the nuclear power industry still receives massive subsudies for new reactor construction, and current projects are competing for $18.5 billion in loan guarantees. This, despite the fact that in no way is nuclear power an “infant industry.” Earlier this year, an anniversary passed without much fanfare. On May 26, 1958, the Shippingport nuclear power plant went online. We’ve had 55 years of commercial nuclear power in the United States, and the subsidies continue. This omission is a little hypocritical, but it’s not the stunning hypocrisy in the title of this piece.

What stunned me was where I read the Wall Street Journal editorial. It was extracted and linked on NEI SmartBrief, the daily news summary of all things nuclear hosted by the Nuclear Energy Institute. What makes this jawdroppingly hypocritical is the the NEI knows as well as I do that new reactors make no sense without taxpayer subsidies.

Not to belabor the point, but to give a single example, the Wichita Eagle reported last week:

The reason? The company told the NRC it was because Nine Mile Point 3 was not selected for federal loan guarantees.

By day, I work for a call center. In my spare time, I try to save my hometown (and planet) from a nearly constant onslaught of greedheads, lunatics and land developers. I live in a fictional town called Austin, Texas, where I go to way too many meetings.
View all posts by Robert Singleton →
This entry was posted in Loan guarantees, Nuclear Energy Institute and tagged loan guarantees, nuclear power, United States. Bookmark the permalink.