Posted on November 13, 2013 by Robert Singleton 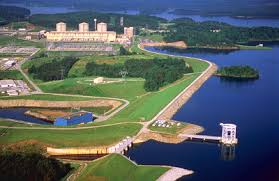 The Greenville News reported this morning:

Duke Energy said Monday company officials shut down Unit 1 at the Oconee Nuclear Station after a small radioactive leak was detected, the second time in less than three weeks a problem has shut down a plant reactor. (Unit 3 resumed service last month after a system malfunction caused a four-day shutdown.)

The shutdown was not without complications:

Following the reactor trip, four valves that relieve steam failed to “reseat” and were reseated after system pressure was lowered….

The Oconee nuclear power plant is among the oldest in the United States and has not been without problems. As the Greenville News reported:

…a recent government study showed that over that time the station has required among the highest levels of scrutiny in the industry because of ongoing safety concerns.

The study, conducted by the federal Government Accountability Office, also determined that the NRC, the agency responsible for nuclear oversight, has enforced its rules unevenly depending on what part of the country a reactor operates in.

The NRC has acknowledged the discrepancies and in its response to the study pledged to investigate why they exist.

The News piece also cited “concerns over what NRC engineers have identified as inadequate flood protection from a potential break in the Jocassee Dam upstream….”

Here’s a link to the Greenville News article: http://www.greenvilleonline.com/article/20131112/NEWS/311120019/Duke-Radioactive-water-leak-Oconee-poses-no-danger

By day, I work for a call center. In my spare time, I try to save my hometown (and planet) from a nearly constant onslaught of greedheads, lunatics and land developers. I live in a fictional town called Austin, Texas, where I go to way too many meetings.
View all posts by Robert Singleton →
This entry was posted in Duke Energy, Oconee and tagged nuclear power, Oconee, South Carolina, United States. Bookmark the permalink.