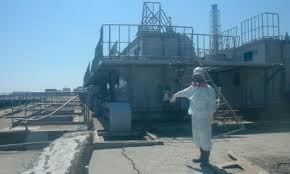 A concrete mixer truck contaminated with radioactive substances exceeding the limit traveled outside the premises of Tokyo Electric Power Co.’s Fukushima No. 1 nuclear power plant on Saturday, the company said the same day.

A worker drove the truck off the plant site despite being aware of the above-limit contamination, according to TEPCO.

A radiation check conducted at the plant site prior to the truck’s departure detected 22,000 counts per minute near the upper part of the truck’s rear bumper, exceeding the limit of 13,000 cpm for a vehicle to be allowed off the premises.

Against decontamination guidelines, the vehicle traveled out of the plant site at about 1:25 p.m., TEPCO said.

This short news item raises a number of questions, including:

1. Why was the truck allowed to leave the site with contamination above the legal limts?

By day, I work for a call center. In my spare time, I try to save my hometown (and planet) from a nearly constant onslaught of greedheads, lunatics and land developers. I live in a fictional town called Austin, Texas, where I go to way too many meetings.
View all posts by Robert Singleton →
This entry was posted in Fukushima, Japan, TEPCO, Transportation and tagged fukushima, Japan, nuclear power, TEPCO. Bookmark the permalink.