New problem at Fukushima: Groundwater leaking into contaminated plant and how to dispose of it 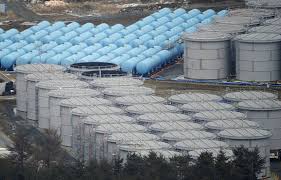 Two years after a triple meltdown that grew into the world’s second worst nuclear disaster, the Fukushima Daiichi nuclear power plant is faced with a new crisis: a flood of highly radioactive wastewater that workers are struggling to contain.

Groundwater is pouring into the plant’s ravaged reactor buildings at a rate of almost 75 gallons a minute. It becomes highly contaminated there, before being pumped out to keep from swamping a critical cooling system. A small army of workers has struggled to contain the continuous flow of radioactive wastewater, relying on hulking gray and silver storage tanks sprawling over 42 acres of parking lots and lawns. The tanks hold the equivalent of 112 Olympic-size pools.

As the problem continues, the on-site storage tanks are reaching their limits:

But even they are not enough to handle the tons of strontium-laced water at the plant — a reflection of the scale of the 2011 disaster and, in critics’ view, ad hoc decision making by the company that runs the plant and the regulators who oversee it. In a sign of the sheer size of the problem, the operator of the plant, Tokyo Electric Power Company, or Tepco, plans to chop down a small forest on its southern edge to make room for hundreds more tanks, a task that became more urgent when underground pits built to handle the overflow sprang leaks in recent weeks.

And, there may be worse problems in the near future:

…the constant threat of running out of storage space has turned into what Tepco itself called an emergency, with the sheer volume of water raising fears of future leaks at the seaside plant that could reach the Pacific Ocean.

The Times article also contained this assessment of the current situation at Fukushima:

The jury-rigged cooling loop that pours water over the damaged reactor cores is a mazelike collection of pumps, filters and pipes that snake two and a half miles along the ground through the plant. And a pool for storing used nuclear fuel remains perched on the fifth floor of a damaged reactor building as Tepco struggles to move the rods to a safer location.

By day, I work for a call center. In my spare time, I try to save my hometown (and planet) from a nearly constant onslaught of greedheads, lunatics and land developers. I live in a fictional town called Austin, Texas, where I go to way too many meetings.
View all posts by Robert Singleton →
This entry was posted in Fukushima, GE Mark I reactor, Meltdown, Plant shutdowns, Radiation leak and tagged fukushima, Japan, leak, nuclear power, TEPCO. Bookmark the permalink.