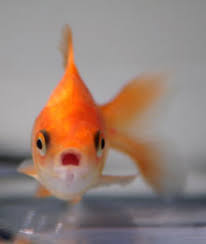 You should know by now that I can’t resist a radioctive animal story. The Cleveland Leader reported yesterday:

An investigation is underway by the U.S. Nucleaer Regulatory Commission after a pair of radioactive goldfish were discovered swimming in a lemonade pitcher in the steam tunnel of the Perry Nuclear Power Plant in Ohio.

The Perry Nuclear Power Plant is located about 40 miles northeast of Cleveland in North Perry, Ohio, and is situated near the coast of Lake Erie.

The two fish were discovered when crews were taking down scaffolding earlier this week following a 43-day maintenance shutdown of the plant.

Investigators are now questioning employees and contractors, and are also reviewing video recordings of the tunnel.

Young added that the fish were only slightly radioactive. They died on Thursday, but likely due to lack of care and not radiation.

By day, I work for a call center. In my spare time, I try to save my hometown (and planet) from a nearly constant onslaught of greedheads, lunatics and land developers. I live in a fictional town called Austin, Texas, where I go to way too many meetings.
View all posts by Robert Singleton →
This entry was posted in Perry, Radioactive animals and tagged nuclear power, Ohio, Perry, radioactive goldfish, United States. Bookmark the permalink.