Posted on February 2, 2013 by Robert Singleton 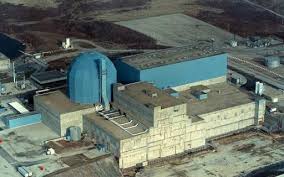 In an article appearing Tuesday in the Wall Street Journal, Rebecca Smith wrote:

“… today, U.S. utilities are encountering something they never expected: Some natural-gas-fired power plants are cheaper to run than nuclear units.”

While that is something that most of us have known for some time, the next line entered new territory:

“And that is leading some companies to consider shuttering their nuclear facilities.”

Smith reports that low gas prices, combined with the need for repairs, may cause a number of plants to close early:

“Among the nuclear plants regarded as vulnerable by UBS Investment Research are Exelon Corp.’s 25-year-old Clinton plant in Illinois and its 43-year-old Ginna plant in New York, as well as Entergy Corp.’s 40-year-old Vermont Yankee and 38-year-old FitzPatrick plants in Vermont and New York.

Smith says that cheap electricity prices have already had an impact on the operating life of some nuclear power plants:

“Some companies have already announced shutdowns. In October, Dominion Energy Resources Inc. said it would retire its Kewaunee nuclear plant in Wisconsin in mid 2013 even though it still has 20 years left on its operating license.

Dominion said it would be cheaper to meet its contractual obligations to nearby utilities with electricity bought on the open market than getting it from Kewaunee, which Dominion bought in 2005.

Exelon plans to shut down its Oyster Creek plant in New Jersey in 2019, 10 years before its license expires.”

By day, I work for a call center. In my spare time, I try to save my hometown (and planet) from a nearly constant onslaught of greedheads, lunatics and land developers. I live in a fictional town called Austin, Texas, where I go to way too many meetings.
View all posts by Robert Singleton →
This entry was posted in Clinton, Crystal River, Duke Energy, Entergy, Exelon, FitzPatrick, Kewaunee, Nuclear Renaissance, Oyster Creek, Plant closures, San Onofre, Uncategorized and tagged nuclear power, United States. Bookmark the permalink.