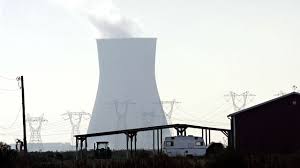 1. The Oyster Creek nuclear power plant, currently shut down for refueling, lost 36 of its 43 emergency sirens during the storm.

2. Peach Bottom nuclear in Pennsylvania reported a similar incident, losing 31 of its 97 sirens.

4. The Nine Mile Point nuclear plant in New York experienced an automatic shutdown of its Unit 1 reactor following a load reject. The reactor’s High Pressure Coolant Injection system activated during the incident. It is not immediately clear whether the load reject was a result of the hurricane. The reactor tripped from 100 per cent power.

5. The Indian Point nuclear station in New York also had an automatic shutdown in its Unit 3 reactor during the storm “due to a direct electrical trip to the Unit 3 Main Turbine Generator.” This unit was also operating at 100 per cent output at the time of the incident.

6. Unit 1 at the Salem nuclear power plant in New Jersey was manually shut down last night after the loss of four condensor recirculators.

Following the incident incident, the reactor lost its two remaining circulators, requiring the unit to initiate an atmospheric steam dump in order to remove decay heat from the reactor.

7. And Nine Mile Point was also forced to switch on its Emergency Diesel Generators to provide electricity to it Unit 2 reactor following loss of offsite power.

By day, I work for a call center. In my spare time, I try to save my hometown (and planet) from a nearly constant onslaught of greedheads, lunatics and land developers. I live in a fictional town called Austin, Texas, where I go to way too many meetings.
View all posts by Robert Singleton →
This entry was posted in Event Reports, Hurricane, Nuclear Regulatory Commission and tagged Event Reports, hurricane, nuclear power, Nuclear Regulatory Commission, United States. Bookmark the permalink.