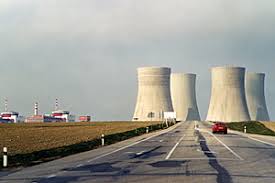 On Thursday, inspectors at the Doel nuclear power plant in Belgium discovered cracks in the Unit 3 reactor vessel. As CBS News reported Friday:

The possible flaw was discovered while the plant was shut for annual maintenance, Karina De Beule, a spokeswoman for AFCN, the Federal Agency for Nuclear Control, said Friday. She said the potential problem will keep the Doel 3 plant, which is north of Antwerp, offline at least until the end of August.

This may have lost something in translation, but it scared the life out of me:

Asked if there was danger to the public, De Beule said, “Of course not. Even if we were to discover a fissure, not every fissure is a problem.”

A subsequent AFP report casts doubt on whether the affected unit can be restarted:

The head of Belgium’s federal agency for nuclear safety AFCN said on Friday he was “sceptical” that an ageing reactor closed over fears of cracks could be restarted.

“I’m fairly sceptical for the moment,” Willy de Roovere told RTBF public radio, even if “the possibility remains that I am wrong.”

And the ripples from the problems with the Belgian reactor may extend to other countries, including the United States, according to a Platts report:

Dominion’s four Virginia nuclear units have reactor pressure vessels made by the same manufacturer that supplied a Belgian reactor shut down because of possible vessel cracking, a Dominion spokesman said Friday.

Dominion is following developments in Belgium, but has not been notified by the US Nuclear Regulatory Commission of any information related to the incident, Richard Zuercher said.

The NRC is sending a materials expert to a meeting in Belgium on the matter next week, agency spokesman Scott Burnell said Friday. It is too early to say whether NRC will impose additional requirements based on the Belgian incident.

The Belgium Federal Agency for Nuclear Control said Wednesday that possible cracking had been found at Electrabel’s Doel-3 nuclear generating unit during a mandatory test of the vessel. The unit was ordered shut and regulators said it will remain down until at least the end of August.

Dutch company Rotterdam Dry Dock, which is no longer in business, manufactured the vessel for Doel-3 and an estimated 20 other units around the world, including reactors in Germany, the Netherlands, Spain, Sweden, Switzerland and the US, according to published reports this week. The type of cracking discovered at Doel-3 is associated with manufacturing issues, not with vessel aging, the Belgian regulator said Thursday.

The potentially affected reactors are two at North Anna and two at Surry.

By day, I work for a call center. In my spare time, I try to save my hometown (and planet) from a nearly constant onslaught of greedheads, lunatics and land developers. I live in a fictional town called Austin, Texas, where I go to way too many meetings.
View all posts by Robert Singleton →
This entry was posted in Dominion, Europe, North Anna, Surry and tagged Belgium, North Anna, nuclear power, Surry, Virginia. Bookmark the permalink.

1 Response to Escalating concerns may keep Belgian reactor closed; four reactors in Virginia may also be subject to increased inspection