Event Reports: Three nukes shut down (or should have been) over weekend; toxic gas release, high temperature, stuck control rod assembly to blame 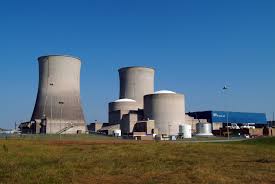 1. Friday morning, operators at the Watts Bar nuclear power plant in Tennessee declared an emergency and issued a Notice of Unusual Event (NOUE) for the facility’s sole reactor. The NOUE was the result of the detection of a toxic gas (ammonia) buildup in the turbine building. For some reason, despite the emergency declaration, the plant continued to operate at 100 per cent output during the incident. The NOUE was terminated Friday afternoon. The cause of the ammonia leak was a valve in the fill tank that had not been fully closed.

2. Early Sunday morning, Unit 2 at the Millstone nuclear power plant in Connecticut began a Technical Specification shutdown after temperatures in Niantic Bay exceeded the plant’s operating specifications. The Technical Specification condition requires that the plant be shut down within six hours when temperatures in the Bay are too high. The reactor is at 0 per cent output as of this morning’s Reactor Status Report.

3. Sunday afternoon, Unit 1 at the Calvert Cliffs nuclear power plant in Maryland when a control rod assembly could not be withdrawn from the reactor’s core. The dropped rod assembly required shutdown if the condition could not be resolved within two hours. The reactor is at 0 per cent power this morning.

By day, I work for a call center. In my spare time, I try to save my hometown (and planet) from a nearly constant onslaught of greedheads, lunatics and land developers. I live in a fictional town called Austin, Texas, where I go to way too many meetings.
View all posts by Robert Singleton →
This entry was posted in Calvert Cliffs, Event Reports, Millstone, Nuclear Regulatory Commission, Watts Barr and tagged Calvert Cliffs, Connecticut, Event Reports, Maryland, Millstone, nuclear power, Nuclear Regulatory Commission, Tennessee, United States, Watts Bar. Bookmark the permalink.