Update on NRC Bulletin on electrical problems: Problem in April with South Carolina nuke may be related 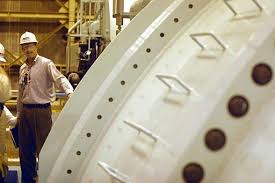 The NRC is threatening the Catawba nuclear plant in South Carolina with increased inspections following a loss of power incident in April. The details, as reported by South Carolina newspaper The State, sound as if they might be the same problem that prompted an NRC Bulletin earlier today:

Investigators traced the problem to a programming error when electrical changes were made on Unit 1 last July and November and to Unit 2 in February. The error meant off-site power would be inadvertently lost anytime the units’ generator shut down because of a power fluctuation.

A ground fault on a reactor coolant pump triggered the reactor, turbine and generator to stop during the April 4 incident.

Losing the off-site power removes the primary energy source for the plant operations, including the system that keeps cooling water circulating.

By day, I work for a call center. In my spare time, I try to save my hometown (and planet) from a nearly constant onslaught of greedheads, lunatics and land developers. I live in a fictional town called Austin, Texas, where I go to way too many meetings.
View all posts by Robert Singleton →
This entry was posted in Catawba, Duke Energy, Loss of offsite power, Nuclear Regulatory Commission and tagged Duke Energy, loss of power. Bookmark the permalink.