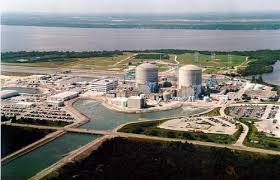 Some items from the Nuclear Regulatory Commission’s Event Reports pages for this week:

1. The Harris nuclear power plant in North Carolina reported a strange incident. Last Friday, a man and a woman in a Jeep Cherokee drove up to the site security gate and “stated they had a bomb in the vehicle,” according to the Event Report. The two were arrested and held for local law enforcement. The Raleigh bomb squad searched the Jeep, but didn’t find anything that went boom. I don’t have any idea what leads people to believe that this is sensible behavior. Boredom? Stupidity? Brain damage? Must have sounded like a good idea at the time….

2. On Saturday, Unit 1 at the Saint Lucie nuclear power plant in Florida suffered a reactor trip caused by turbine control system failure. The reactor was at 100 per cent power prior to the incident. The cause of the shutdown is under investigation.

3. And, on Wednesday morning, Unit 2 at the Indian Point nuclear power tripped from 100 per cent output due to a turbine main generator trip. The reactor is currently shut down while an investigation is underway.

By day, I work for a call center. In my spare time, I try to save my hometown (and planet) from a nearly constant onslaught of greedheads, lunatics and land developers. I live in a fictional town called Austin, Texas, where I go to way too many meetings.
View all posts by Robert Singleton →
This entry was posted in Event Reports, Harris, Indian Point, Nuclear Regulatory Commission, Plant shutdowns, Reactor problems, Saint Lucie, Security and tagged bomb threat, Florida, Harris, Indian Point, New York, North Carolina, nuclear power, Nuclear Regulatory Commission, Saint Lucie, United States. Bookmark the permalink.