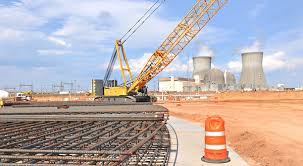 Sometimes there’s just not enough detail on the Nuclear Regulatory Commission’s Event Reports page. This morning, Shaw Nuclear Services and subcontractor Joseph Oat Corporation of Charlotte, North Carolina, reported to the NRC what was described as “a noncompliance associated with the steel reinforcing material (rebar) attached to embedments being supplied as basic components for the Vogtle Units 3 and 4, nuclear project, based on reinforcing bar that exceeded the limit for yield strength.”

It is unclear whether this is the same rebar issue covered in a Bloomberg artilce published yesterday. Bloomberg reported:

The reactors, due to be completed in 2016 and 2017, are already running seven-and-a-half months late and could be set back further by “additional potential delays recently identified” by Southern’s construction partners, William Jacobs said in testimony filed on the Georgia Public Service Commission’s website today.

Jacobs said that the delays were because of a ‘design issue.’ If you’re curious about what that means, I can’t help you. According to Bloomberg:

Jacobs said the latest delays stem from improperly installed rebar and a design issue, the details of which were redacted from his testimony to protect trade secrets.

I can understand Southern’s concerns. If their trade secrets got out, what’s to stop another enterprise from raising $15 billion, securing NRC approvals and a DOE loan guarantee and building a nuclear plant across the street from Vogtle? I’m sure all that’s keeping that from happening is knowing which way to put in the rebar.

By the way, William Jacobs is not an employee of Southern Co. He is the independent monitor hired by Georgia’s utility regulatory agency to oversee the Vogtle expansion.

After “lengthy” negotiations with federal regulators, Southern and its construction partners agreed to remove some of the installed rebar and follow the original design, Jacobs said.

Doing so would delay pouring of first nuclear concrete, a construction milestone, by about three months until September or October, Jacobs said.

Here’s a link to the Bloomberg article: http://www.bloomberg.com/news/2012-05-31/southern-s-nuclear-construction-faces-added-delays-monitor-says.html

By day, I work for a call center. In my spare time, I try to save my hometown (and planet) from a nearly constant onslaught of greedheads, lunatics and land developers. I live in a fictional town called Austin, Texas, where I go to way too many meetings.
View all posts by Robert Singleton →
This entry was posted in Construction delays, Event Reports, Nuclear Regulatory Commission, Nuclear Renaissance, Southern Co., Vogtle and tagged Georgia, nuclear power, Nuclear Regulatory Commission, Nuclear renaissance, Southern Co., United States, Vogtle. Bookmark the permalink.

3 Responses to Event Report and update: Vogtle rebar doesn’t meet standards, may push back construction schedule and add to cost of new reactors