Is it just me, or is this a stunningly stupid idea? Georgia company seeks permission to import radioactive waste from Mexico, incinerate it in Washington state 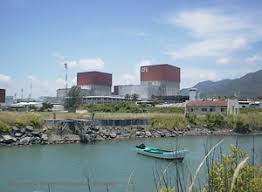 An Atlanta-based company, Perma-Fix Environmental Solutions Inc., has filed an application with the Nuclear Regulatory Commission (NRC) to import up to 500 tons of radioactive waste from the Laguna Verde nuclear power plant in Mexico. Perma-Fix wants to ship the waste to a facility the company owns near Richland, Washington. Perma-Fix would then incinerate the waste at its site. A second license application would allow Perma-Fix to ship the waste back to Mexico for disposal.
Setting aside for a moment the wisdom of burning nuclear waste, the Perma-Fix proposal raises a number of questions about the transportation of nuclear waste for disposal. If the NRC approves the plan, the waste would be trucked in an as yet unspecified number of shipments on interstate highways through a number of states, as well as trips from the Laguna Verde site in Veracruz to the international border crossing at Laredo.
The shortest route from Laredo to Richland would take the shipments along a 2,000 mile route through seven states: Texas, New Mexico, Colorado, Utah, Idaho, Oregon and Washington. The route might be even longer if the trucks travel only on interstate highways.
At the very minimum, Perma-Fix should be required to show that they have adequate insurance to fully cover any damages due to transportation accidents, must demonstrate that they have made all necessary arrangements to have fully trained and equipped police and fire responders standing by along the route and must show that they can protect the radioactive waste from theft or sabatoge.
There was a thirty-day comment period on the Perma-Fix proposal, but it expired at 5 p.m. today. Austin’s Sustainable Energy and Economic Development (SEED) Coalition filed a detailed critique of the plan and asked the NRC for an extension of the comment period.
Here’s a link to an Associated Press article published in the Washington Post about the Perma-Fix application: http://www.washingtonpost.com/national/energy-environment/us-company-applies-to-import-radioactive-waste-from-mexico-incinerate-it-and-return-the-ash/2012/05/02/gIQA1uT9wT_story.html

By day, I work for a call center. In my spare time, I try to save my hometown (and planet) from a nearly constant onslaught of greedheads, lunatics and land developers. I live in a fictional town called Austin, Texas, where I go to way too many meetings.
View all posts by Robert Singleton →
This entry was posted in Laguna Verde, Low-level radioactive waste, Mexico, Nuclear Regulatory Commission, Perma-Fix and tagged Laguna Verde, low level radioactive waste, Mexico, nuclear power, Nuclear Regulatory Commission, Perma-Fix, United States. Bookmark the permalink.

2 Responses to Is it just me, or is this a stunningly stupid idea? Georgia company seeks permission to import radioactive waste from Mexico, incinerate it in Washington state